Podcast Pipeline: How to Survive and Thrive in the Competitive Landscape of Children’s Podcasting 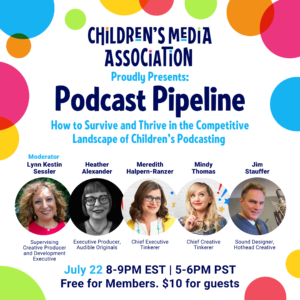 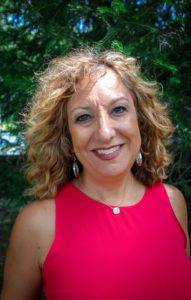 Lynn is Executive Producer on Go, Dog, Go! And The Cat in the Hat Knows A lot About That!,  Producer on 2 award-winning podcasts for PINNA ( Highlights Hangout, and the Webby & Parent’s Choice honored-Emma-Made Lemonade, 4 current audio series for Audible as well as Supervising Podcast Producer for Nick Jr.’s Noggin on Meet the Alpha Beats.  Currently, Lynn is developing animated shows for PBS and producing new podcasts for Nick Jr.’s Noggin. Lynn is also on the PGA New Media Council Board, the PGA Employment Committee and PGA WIN. 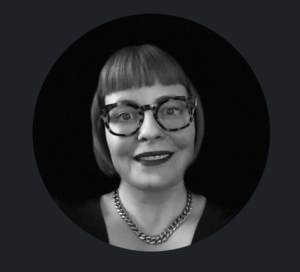 Heather Alexander started in children’s media as a book editor at Dial, an imprint of Penguin Random House. From there, she shifted to the other side of the desk and was a literary agent at Pippin Properties where she developed a love of audio. From there, Audible came calling, and it was the perfect meshing of her love for creative development and her love of all things audio. Some favorite titles include The Mystwick School of Musicraft by Jessica Khoury; Rivals! Frenemies who Changed the World by Scott McCormick; and The Flying Flamingo Sisters by Carrie Seim. 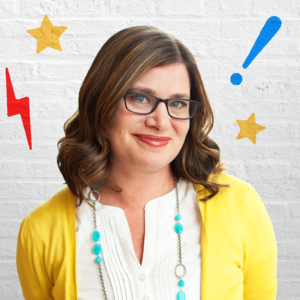 Meredith Halpern-Ranzer is Tinkercast’s Chief Executive Tinkerer, leading the vision and execution of business, partnerships, brand and marketing strategies and overseeing day-to-day operations. Meredith is an Emmy-nominated children’s media executive and has been a thought-leader in the children’s media industry for over 20 years, building beloved brands, shows and characters most notably at PBS Kids Sprout and Sesame Workshop. She is a founding member and on the board of advisors of Children’s Media Association. She lives in Montclair, NJ where she is a constant seeker of WOW in her world with her husband, son and a dog named Shuggie. 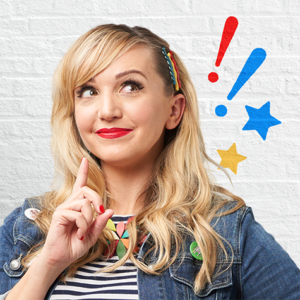 Mindy Thomas is Tinkercast’s Chief Creative Tinkerer and Co-Creator of Wow in the World. Mindy has been living out her childhood radio dreams for almost two decades by creating radio and audio programs for kids. She’s the co-creator, co-host, and head writer of the award-winning Wow in the World and Two Whats?! And a Wow! podcasts. She is also the Gracie award-winning host of the Absolutely Mindy show. Mindy believes that childhood thrives at the intersection of imagination and curiosity and finds that her best work does too. She lives in northern Virginia with her husband and two kids, and has no plans of ever growing up. 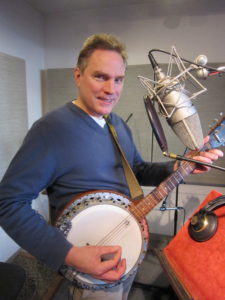 Jim’s creativity and ability to bring projects to life coupled with his offbeat sense of humor has kept a wide range of clients insisting on his talents. Highly regarded as an innovative sound designer, musician, voice artist and recording engineer and the recipient of many prestigious awards including ProMaxBDA, Clio, Manny Awards, Annies and the Emmy.

He can be heard as the voice of Dot on Pocket.Watch and Nickelodeon’s Ryan’s World.